Three months after the event – and interrupted by a couple of blogs on our pre-Christmas weekend in Hong Kong – here is the final installment in our Laos-Cambodia trip: Siem Reap and the Angkor Temples…

From the airport we caught a remork (Cambodian tuk-tuk) to our hotel, our luggage piled precariously at our feet, and as our driver sped into the night the smell of smoke mingled with the powerful fragrance of the frangipani trees. The long, wide, straight road from the airport was lined on either side by floodlit luxury hotels, then a few minutes later by a smattering of late-licenced shops and bars. We turned off the main road to take a weaving route through increasingly dark, narrow and gravelly streets, at one point passing through what was clearly the red light district; I gave Matt a sideways look which said “our hotel better not be here!” but to my relief we pressed on towards The Green Corner Residence, a small but beautifully designed hotel tucked away at the end of a secluded cul-de-sac.

With five full days ahead of us in Siem Reap we were in no rush to see the temples on Day 1. Instead, we chilled out by the pool (me) and explored the city centre (Matt). Siem Reap is often referred to as the ‘gateway to the Angkor temples’; a functional base camp in which to to eat and sleep, in close proximity to the Angkor Archaeological Park. It fits this bill perfectly, with lots of great bars, restaurants, coffee shops, massage parlors and a huge day-to-night market. We read about a number of other things to do – from Khmer cooking classes to the Phare Circus – but as this was the last stop on our trip we indulged in a good bit of R&R when we weren’t out ogling temples.

The atmosphere in Siem Reap (once you learn to tune out the persistent solicitation of remork drivers and massage therapists) is very laid back and it seemed we were only ever 3-4 metres away from a frozen margarita which was ideal! 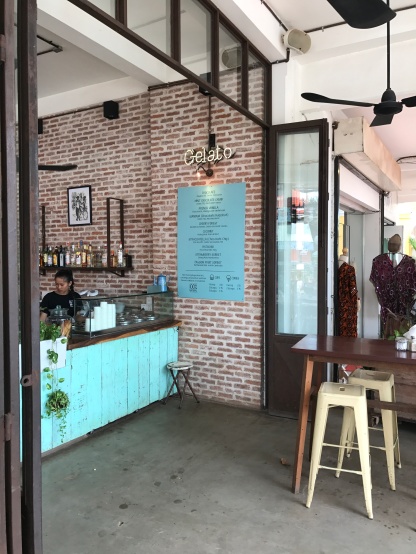 A popular gelato and coffee bar

A central street in Siem Reap 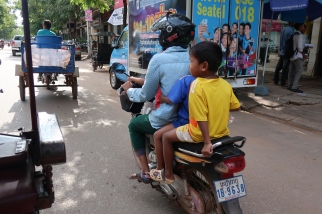 The main mode of transport (usually without helmets)

R&R successfully accomplished, we set off the next day to explore Angkor Archeological Park; the 400 sq km stretch of lush Cambodian forest which contains the remains of the different capitals of the Khmer Empire- including over 1000 temples. From the 9th to the 15th century each Cambodian ‘god-king’ strove to surpass his predecessor by building a bigger, grander, more symmetrical and increasingly intricately carved place of worship which culminated in the world’s largest religious building: Angkor Wat.

Today the remains range from ruinous piles of moss-covered rubble through to painstakingly well-restored landmarks – thankfully all now safeguarded by UNESCO – and you can choose whether to stick to the well-trodden paths or venture further afield to some of the more remote areas. We hired a remork and driver via our hotel, purchased a 3-day pass* from the ticket office, and explored 9 temples over two visits:

* FYI, there are three types of tickets: a 1 day ($37), 3 day ($62) and 7 day ($72); the latter tickets can be used on non-consecutive days over a fixed period, for example the 3-day pass that we chose can be used over a ten-day period. Peculiarly the ticket office is around half way between Siem Reap centre and the Park so you need to make a stop here first to buy a pass – be prepared to show your passport or ID card, have your photo taken, and pay in cash. 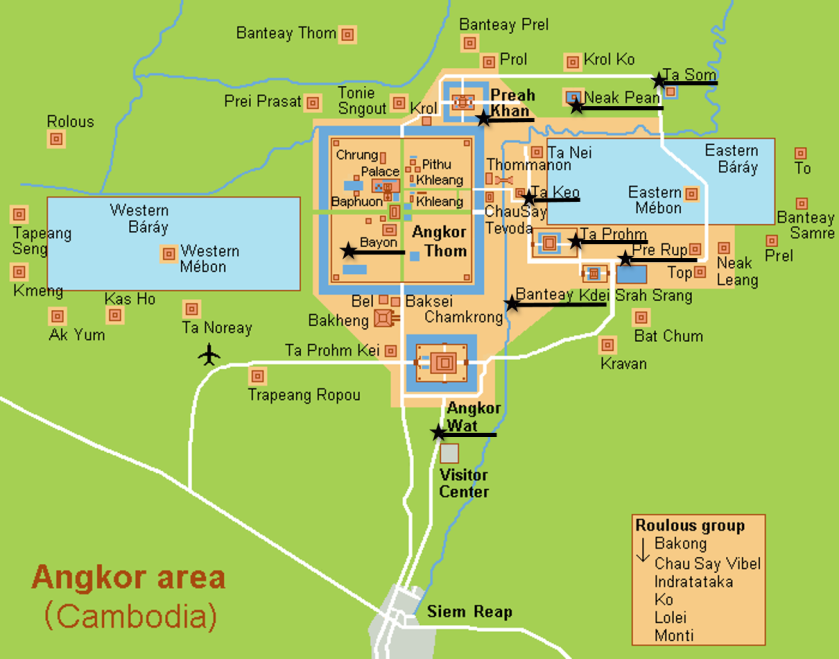 Unsurprisingly there is a wealth of information on the internet about the Angkor temples so it’s not my intention to replicate that here. Instead, I have captured some of my favourite photos from our temple tour, with a few brief captions.

The first temple we visited was Bantaey Kdei, a massive Buddhist monastery built during the reign of Cambodia’s most celebrated king, Jayavarman VII, in the latter part of the 12th century.

Nicknamed the ‘Tomb Raider Temple’ – having provided the backdrop to the 2001 movie – Ta Prohm is one of the most popular temples in the park. Built by Jayavarman VII for his mother, and consecrated in 1186, the temple is an amalgamation of long narrow corridors, courtyards and towers, many now enveloped by the strapping roots of twisting towering trees. The effect is powerful and atmospheric, the sunlight filtering where it can through the canopy of leaves and casting shadows over the mossy stones and earth.

Despite the army of blood-red ants that launched a full-scale attack on my calves if I dared to stand still for a second, I think Ta Prohm was my favourite temple. The devastatingly powerful trees slowly but surely ensnaring the stone buildings in their inexorable and unyielding grip was captivating. I felt tiny stood next to the tree in the photo above!

Built in the late 12th- early 13th century, Bayon was the official state temple of Jayavarman VII (the same King who ordered the construction of Banteay Kdei). It is known as the ‘face temple’, due to the unique and extraordinary stone faces built into it’s upper towers.

Angkor Wat was built for king Suryavarman II in the early 12th century, and is recognised as the world’s largest religious building. It is also the symbol of Cambodia, appearing on the national flag and is the prime attraction for tourists to the country. We debated whether to get up early to watch the sunrise over the temple (as friends who had visited before us had implored us to do) but when push came to shove we decided in favour of a few extra hours in bed! Heavy grey clouds hung over Angkor Wat as we explored, but luckily didn’t break and so made for some great photos.

Prasat Nean Pean is a small island temple which sits at the axis of a cross or lotus pattern of eight pools, thought to have powerful healing properties. When we visited in October the lake were full and the result was spectacular.

Here are a collection of photos from some of the other temples that we visited; Ta Keo, Preah Khan, Ta Som and Pre Rup.

After nine temples we felt like we had seen enough (and it was so hot that I feared I was melting!), so we spent the remainder of our time in Siem Reap trying out the local cuisine in the luxury of air-conditioned restaurants. One of the best places we ate was Pou Restaurant; their menu was a collection of traditional Khmer dishes which had been given a modern and creative twist. I instantly knew what Matt would choose – the Kulen Mountain sausage with pork belly and tree ants; I couldn’t bring myself to try it, but Matt polished off the lot! 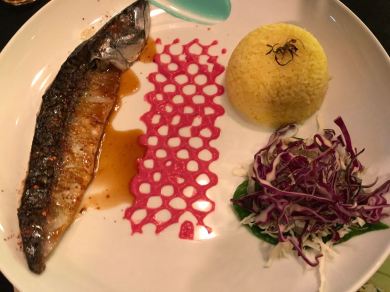 We had a brilliant time in Siem Reap, the temples, the food and the cocktails were first-class. I can even give a glowing review of the Royal Angkor International Hospital where we made an unscheduled visit thanks to a nasty gastroenteritis bug which completely wiped me out, a few hours before we were due to board our flight home! Luckily an IV drip and course of antibiotics brought me back from what felt like deaths door and we made it back to Shanghai – if a little worse for wear… 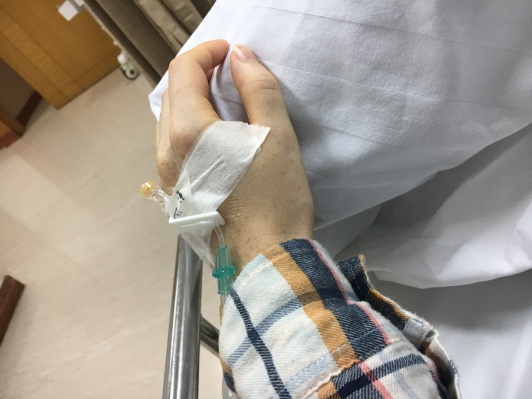 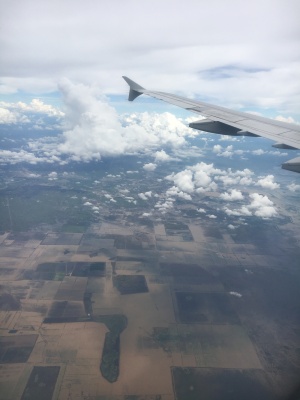