This blog covers the final part of a four-city trip which Matt and I took with my parents earlier this year, starting in Shanghai then in turn visiting Beijing, Pingyao, Xi’an and Zhangjiajie. I’m a bit embarrassed that it’s taken me 5 months to complete this series of blogs, but time runs away with you in this tenacious city (especially when you spend most of that time at work!). Actually, we’re creeping up to to the mid-point of our 3-year work assignment which is at the end of October… a significant milestone. I’ve suggested Matt writes a blog on ‘What we’ve learnt in these 18 months’ but he seems to prefer writing about intestines and feet so maybe I’ll do that one.

So, Zhāngjiājiè ( 张家界). On a recognition spectrum whereby Beijing is 10 and Pingyao is 1,  I would guess that this prefecture-level city in Húnán Province sits somewhere around 4. Every Chinese person I’ve spoken to knows of it (or at least they do once we’ve gotten past the total confusion of them trying to decipher ‘Zhangjiajie’ once it’s been through the mangle that is my best tonal mandarin), and many have been there. British people on the other hand will have likely never heard of it. Case in point: my parents, when I told them that it would be the fourth stop on our China tour.

Zhangjiajie is around 12,000km as the crow flies west from Shanghai. When visiting this area, you can choose to stay in Zhangjiajie city itself, or inside/close to the Wulingyuan National Park (which, fyi, is what people are actually referring to when they talk about going to Zhangjiajie). We decided on the latter.

Nestled deep in the mountains and only 2km from the entrance to the Wulingyuan park, to reach the No.5 Valley Inn we faced a 50 minute off-road car ride from the airport. Uncomfortable: yes. Scary: a little (especially as it was dark). Worth the bruises and residual carsickness: absolutely!

In the light of the next morning, we discovered that the Inn is actually a number of individual wood-and-stone buildings varying in size which are clustered around a central hub housing the bar and reception. We stayed in the building below, which had a number of private bedrooms over two floors and a communal living space-come-dining area, looked after by a dedicated ayi (housemaid/ cook).

After 9 days traversing Beijing, Pingyao and Xian, absorbing all the commanding history and arresting architecture that China could offer us (invariably in the company of teeming crowds of fellow tourists), the clean and quiet surroundings of No5 Valley Inn had an almost tranquilizing effect. In fact, while Matt and my parents ventured out to explore, I spent the morning dozing in bed, drinking herbal tea and feeling generally contented!

In addition to the larger communal buildings there were also some private lodges, a KTV bar and an outdoor swimming pool. Venturing a little further in the grounds, we came across a wooden walkway which wound down the hillside, cutting through green terraced fields, muddy ponds and fields of tiny yellow and pink flowers: it was pretty magical. 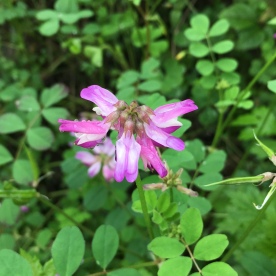 One other thing I really enjoyed about staying here was the evening meals. As I mentioned earlier, each residence had a dedicated ayi who rustled up a delicious dinner made from fresh locally-grown produce, for anyone who happened to be around in the evening. We were served rustic Hunanese food, though with the chilli and offal toned down a bit for our foreign palates! Each night was different, but usually we had a selection of preserved pork, beef, goose or tofu, cooked in the local style (spicy and salty), with a variety of local fresh vegetable dishes such as lotus root, eggplant etc. All washed down with a potent home-made rice wine which ensured the conversation flowed between strangers who soon became friends.

Okay, I think I’ve confessed my love for this place enough(!). Moving on to the real reason we came to visit Zhangjiajie…

A quick online search for the ‘must-see’ attractions in Zhangjiajie will tell you there are three big ones: Wulingyuan National Park, Tianmen Mountain the Grand Canyon Glass Bridge. A word of warning here… these are not exactly in close proximity to each other! and so we only ticked off one out of the three (Wulingyuan) while we were there.

A 4-day pass to the park costs 248 rmb (around £28) and includes internal shuttle bus rides (hop-on-hop-off) throughout the park. These buses are essential given there is a lot of park to cover; 690 square km of forest, rivers, valleys, pathways and caves, not to mention some 243 peaks and over 3000 craggy quartz-sandstone towers, which have formed over the last 380 million years, each one wonderfully unique. Matt and I found the park so big that – even with a map – it was all too easy to hop on a bus and find yourself literally miles in the wrong direction! This could be a bit frustrating given that there weren’t many English signs and even less English speakers, but luckily we always managed to find our way back to the start point!

At certain times of year, the damp and humid climate cloaks the mountains in a dense mist, which is certainly beautiful (and has inspired Chinese artists for centuries) but it did make taking photos a challenge (I have lots of photos of cloud!). I’ve included some of my favourites below, but they don’t really do it justice; if you search online for Zhangjiajie you’ll see the landscape in other seasons.

If the tree-topped sandstone pillars look familiar, it might be because they inspired the vertiginously suspended forest landscape of the fictional moon ‘Pandora’, from the 2009 sci-fi movie Avatar:

If you have been following the blog for a while, you may remember that when Matt and I visited Shangri-La last year we discovered that the city was originally called something along the lines of ‘Middle Yak Meadow’ (in Chinese, obviously), and was only given it’s new, decidedly more exotic name in 2001 to promote tourism. The same thing happened to Zhangjiajie, which was known as Dayong (大庸) until 1994, when the name was changed to give it more prominence befitting it’s recently acquired UNESCO protected status. Likewise, some of the mountains have been renamed since James Cameron’s film, to reflect the names of the Pandora region.

The Padlock Zone (“For Longevity”)

Today more than 20 million visitors come to Zhangjiajie each year to see the famous Avatar mountains, therefore crowds were inevitable (mainly Chinese tourists, in loud and conspicuous organised tour groups). Unsurprisingly, the area dedicated to tying bright red ribbons around the trees and latching golden padlocks to the fencing was particularly popular… for longevity,  you understand. 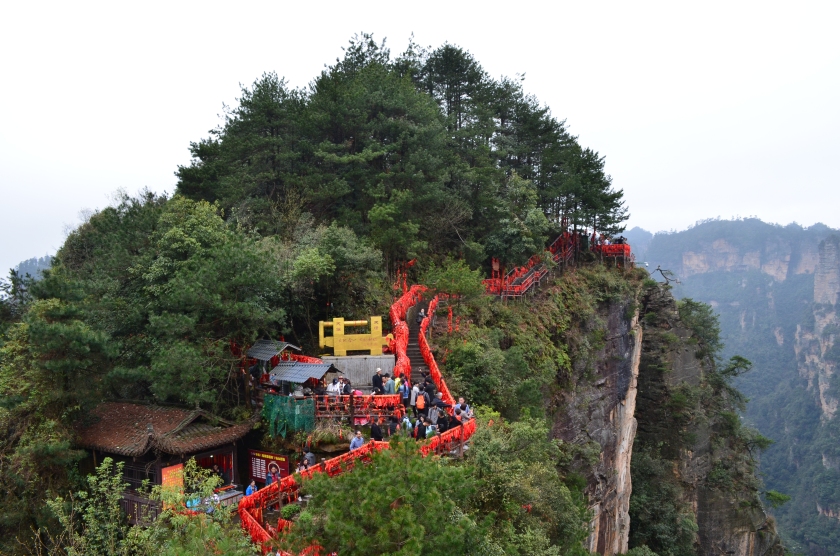 The huge numbers of tourists have apparently prompted the park’s Lǎobǎn (bosses) to sit down and consider what exemplary tourist behaviour looks like, and subsequently engrave a set of guidelines into a large, stone sign at one of the busier park attractions. Matt and I stumbled across this, and must have stood there for 10 minutes reading every line (it took a while, what with all the giggling). We couldn’t get all of its magnificence into a single photo so I’ve transcribed it here. This is honestly one of the best thing’s i’ve read in my life:

The cultivation of a congenial and harmonious travel environment benefits every tourist. It is our bounden to be a tourist with refined manners! So please observe the following tourism etiquette rules:

Told you. Brilliant! We didn’t see anyone else reading the sign so you do wonder at it’s efficacy… however, during our time in the park I can confirm that no-one sneezed in my face or threw stones at animals, so maybe it’s having an effect.

Speaking of animals, the park is home to hundreds of protected macaque monkeys who were bold enough to get quite close. I’m guessing that some less than joyful interactions with between over-curious visitors/monkeys were behind the large signs exclaiming: “Wild monkey infesting area, Caution! Do not tease feeding the monkeys”

On our last day in Zhangjiajie, Matt and I took a walk along the Golden Whip Stream. I think we were incredibly lucky – the weather was damp and drizzly so we had the place largely to ourselves. The stream meanders through verdant forest, polishing the bed of stones and rocky boulders as it flows towards the Li river. We walked for miles and miles, only stopping to buy snacks from some of the vendors which crop up en-route.

Despite the muggy weather, I did get a few cool shots and I’m particularly proud of the series below, taken along the Golden Whip Stream. The almost-bare branches of overhead trees against the murky fog took me back to biology class, in their eerie resemblance to the internal structures of the lung; the remaining leaves like the alveoli at the ends of the respiratory tree.

“Take the Bailong Lift, for viewing the Forty-Eight General Rocks”

We had read about the Bailong elevator – a glass lift built into the mountain with a vertical elevation of 335m – before our trip to Zhangjiajie, and planned to give it a go as apparently the views going up are spectacular and you can walk along the ridge of the mountain at the top. However, you can see from the photo below that we wouldn’t have seen much! The same applied to several of the other higher attractions (such as a McDonald’s at the top of one of the mountains); in cloudy weather we were better off staying at ground level and enjoying the atmosphere.

Despite having spent a couple of days exploring the mountain area, in the end, we didn’t climb Mount Huangshizhai or reach Mount Huangshi Village. Unfortunately for us, it seems that in neglecting to do so means that we have not visited Zhangjiajie after all… at least if the signs around the park (copied below) are to be believed! So, maybe rely on another blog when planning your visit?

“It is no avail of your trip to Zhangjiajie, unless you come to the summit of Mount Huangshi Village”

One thought on “ZhāngJiāJiè and Wulingyuan National Park, China”