With achy legs (the aftershock of hiking up and down a million or so stone steps at the summit of Mt. Huangshan – which you can read about here), Matt and I arrived in downtown Tunxi in need of a bit of R&R, or at the least a cold beer (it had gone 12pm, honest!).

Tunxi District (屯溪区) is in the urban centre of Huangshan City in Anhui Province and is – in Chinese terms – a ‘relatively small countryside town’, despite being home to around 200,000 people: to put this in perspective, there are the same number of people living in York in the UK.

Tunxi straddles the banks of the Xin’an river and is a popular gateway or base-camp for people visiting Mt. Huangshan given it’s only an hour’s drive away. Our riverside hotel was a 1980’s style whitewashed behemoth with creeping ivy and an atmosphere of formal indifference. Ostensibly 5* (the star rating is a relative concept- we are learning), the toilet seat was broken and the carpet was stained so we quickly dropped our bags and headed out into the crisp afternoon sunshine.

Walking along the river we saw a woman bent double washing leafy green vegetables in the water and another hanging them over a railing to dry. A few metres downstream another group of women crouched washing their clothes, as a man on a rusty barge passed by fishing debris out of the water with a net. Out guide Ellen explained that a lot of the older generation preferred the traditional ways of washing clothes and food and so this was just an example of normal daily chores. 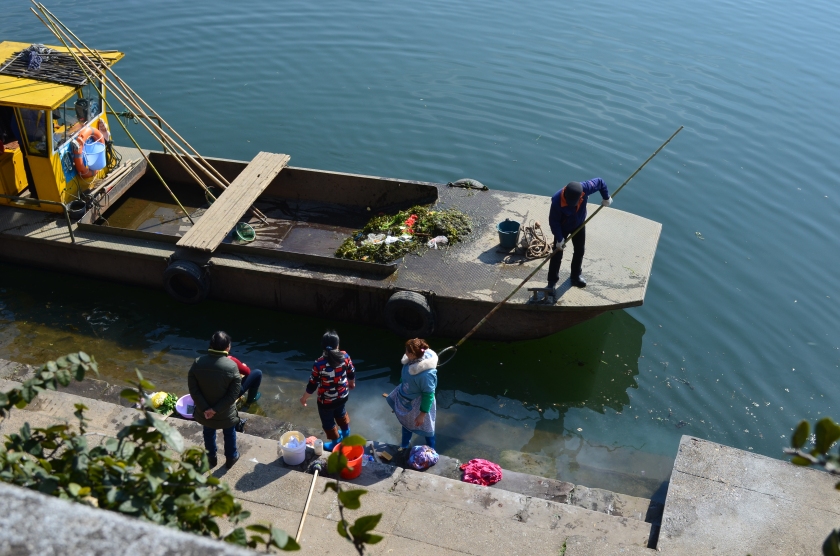 Having washed your laundry in the river, hanging it out to dry in the street doesn’t seem so strange. 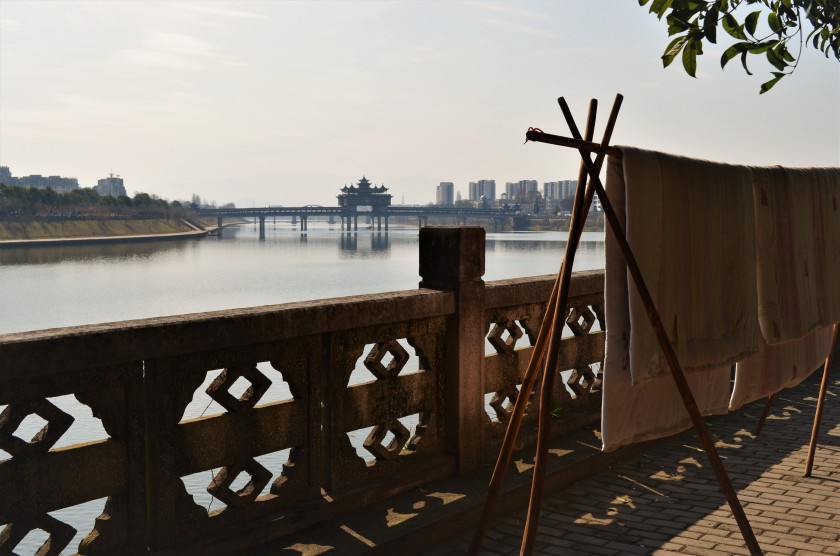 Especially when juxtaposed with this: 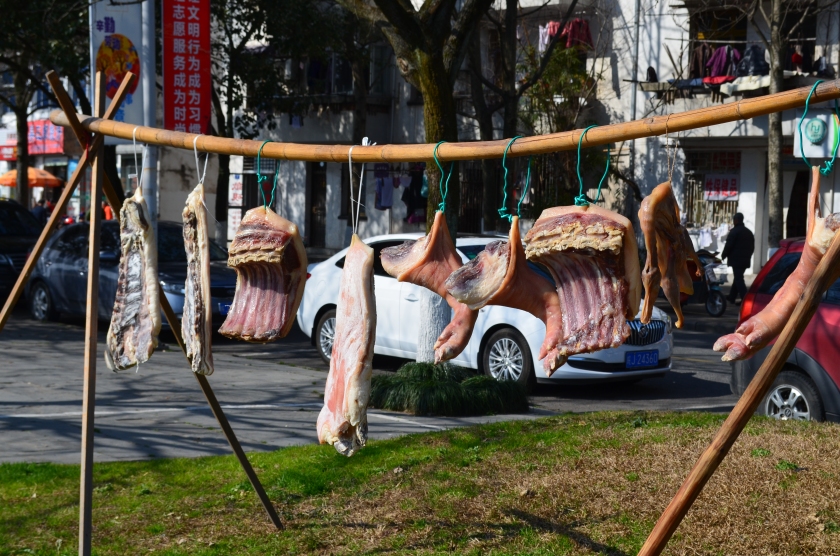 Yes, that is various parts of a pig strung up from a bamboo pole at the side of a main road. And yes, it really did make me think twice about what I was eating for the remainder of the trip!

Tunxi Old Street (or Ancient Street, depending on who you speak to) is at the heart of Tunxi and dates back to the Song Dynasty (960 – 1279). A long and gently winding pedestrian street with wooden-framed shops flanking each side of the flagstone paving, at first glance it was comparable to the Old Town streets we had seen during our visits Yunnan and Guilin; however, Matt and I agreed that it was the most genuine example we had come across. Unlike some of the others which had been destroyed over time by fire and then rebuilt – albeit in a very sympathetic way – Tunxi Old Street was the real deal.

The buildings are designed in the ‘Hui’ style of architecture – typical of the Anhui province – and are constructed from brick, wood and stone over two or three floors. The rooftops were my favourite feature, cutting a jagged cubist silhouette against the sky and into the distance.

Apparently most of these buildings are still occupied, with the living quarters behind and above the open-plan shop areas. Being occupied increases the likelihood of them being preserved from threats such as falling into disrepair, vandalism and Jackie Chan (apparently Jackie Chan had some houses in the area dismantled and rebuilt in Singapore).

The shops spilled with typical produce and crafts of the local area; deep black ink stones, bright yellow chrysanthemum tea, beautiful calligraphy brushes and ink paintings. Every so often the rich and distinctive smell of sesame would drift from a shop selling various cakes, biscuits and paste made from the seed. There were also a lot of nick-nack or antique stores like the one pictured below.

Whenever Matt and I visit a new place we try to find a small hanging ornament for our Christmas tree as a reminder of our travels. I think our Huangshan ornament is one of my favourite to date – a piece of polished grey and reddish-brown stone with our names (in Chinese) etched into the flat surface. These stones are traditionally used by artists to stamp their signature in red ink into a finished piece.

Reaching the end of the Old Street and feeling peckish, we ducked through some brightly coloured, heavy-duty plastic curtains into a dim-sum restaurant which had been recommended by our guide Ellen. We picked out a handful of delicious looking dishes from the counter and then guessed what they might be as we tasted each one – a familiar experience when eating outside of the city and English translations of the menu are less common! 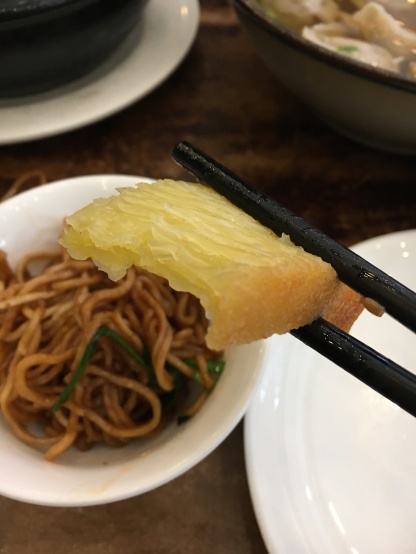 The flaky pastry was my favourite – it was apple-pie flavour!

After lunch we wandered into the New Town on the opposite side of the river to Old Street and found a cafe in which to hunker down for the afternoon and sample the local chrysanthemum tea. It was the first place we’d been in that had central heating – most other restaurants, cafes and bars relied on the customers keeping their thick coats on while inside. It was also one of the  more modern places we came across, so after the tea we had a beer… and another!

Walking back to the hotel later that evening we were met with brilliant fireworks from every direction; a celebration of the end of the Chinese New Year. Fireworks are banned in Shanghai in an attempt to control the noise pollution, so these were the first ones we had seen.

We tried to get some nice wine or whiskey to accompany the fireworks but it didn’t seem like the locals necessarily went in for that (and we’ve been warned off certain brands of whiskey due to an apparently thriving replica market!), so Matt ended up buying some local ‘Mi Jiu’ (Rice Wine). It was a lot nicer than my previous expereince with rice-derived alcohol (seriously, if someone offers you ‘Rice Beer’ just say no!) but that’s not to say I particularly enjoyed it. On the bright side, it saved us a hangover and we were up early to explore some more of the sights…

2 thoughts on “Tunxi, at the foot of the Yellow Mountains”