Last week we had Thursday and Friday off work for the Dragon Boat Festival; When I asked my colleagues what the traditional customs were for this holiday, I was surprised that no-one mentioned dragon boat racing! They mainly talked about family dinners, spending time with their children and eating ‘zongzi’ – sticky rice dumplings filled with meat or beans and wrapped into a triangle shape with bamboo leaves, which are held in place with brightly coloured string. We’ve not tried these yet, but as Matt’s work has given us a large box of them, I’m sure he will write a food-blog when we do! 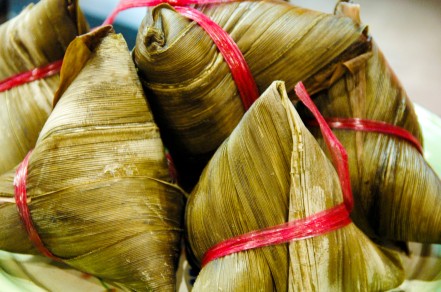 The Dragon Boat Festival occurs annually on the 5th day of the 5th month of the Chinese lunar calendar and commemorates the life and death of Qu Yuan, a famous scholar and poet who lived in the Zhou dynasty (300BC) and drowned himself after falling out of favour with the Emperor. Legend says that the local villagers admired Qu Yuan, and raced out to the river in dragon boats to try to save him. When this failed, they threw lumps of rice in the river to stop the fish eating his body – nice! I should mention, no-one told us any of this… I had to research it online. This contradicted our experience of China so far, as we’ve grown used to almost everything having a meaning that people readily explain to us (peoples’ names, the shapes of buildings and so on) but this same principle wasn’t applied to the Dragon Boat Festival –

Matt and I didn’t see much evidence of festivities in the City, so we decided to commemorate Qu Yuan in our own way… by having brunch with new friends (thanks to Rita and Ada for providing us with great company and conversation!), and visiting the Olafur Eliasson exhibition ‘Nothingness is not nothing at all’ at Shanghai’s Long Museum on the West Bund.

This concrete structure was outside the museum entrance… not sure what it was?! 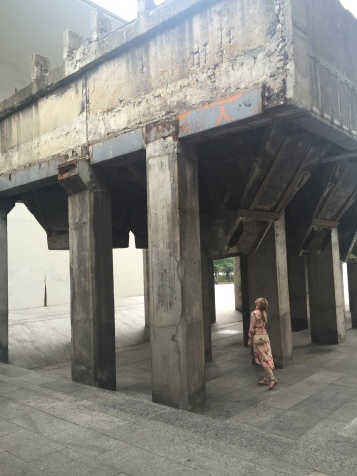 Eliasson’s work explores the constructs of time, space, colour and light using optical devices such as lenses, mirrors and glass spheres, with the intent to distort your visual perception and make you think twice about what you see. Matt described it as a cross between an art gallery and a science museum, which I agreed with, and the interactive element to the art made for a fun way to spend a couple of hours (it helped that the vast concrete gallery was air conditioned and provided an escape from the oppressive 30 degree humid smog outside!)

I took a few photos while we were there…

My favourite piece was ‘Happiness’ (still shot below); you walk down a pitch-black corridor, elbow through a gaggle of i-phones and D-SLRs, and look through a horizontal cut-away in the wall at eye level. The space beyond the opening is deep navy blue with fluorescent water on the lower surface, lit by ultraviolet light. From above, huge soap-bubbles float down and bounce on the liquid floor before settling or colliding with the other spheres; You can get a better idea from Eliasson’s website.

This was another favourite:

The final three are (from L to R) dark rooms containing: 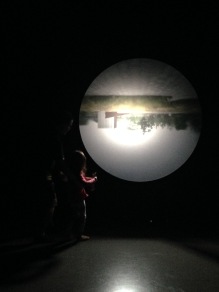 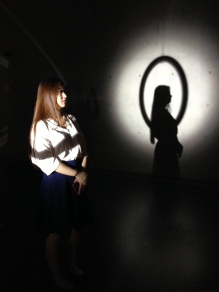 If you’re interested, Olafur Eliasson recorded a TED talk in 2009 called ‘Playing with Space and Light’. It’s a little bit pretentious, although I can appreciate his central point which (I think) is that we should be more involved in the world around us as opposed to viewing it as a static picture. His art certainly provides an excellent backdrop for people watching: my all-time favourite hobby.